I don't claim to have any expertise in bonsai, but find the whole process of miniaturizing trees fascinating. When I'm old and eccentric, I plan to collect all sorts of miniature things. Or maybe I'll make whole miniature gardens and landscapes!

I have had two projects going for 5 years now. The fig and baobab have suffered under my pruners (as RLM puts it) and matured a over this short period of time in the world of bonsai. To keep it simple, let me just show the baobab today. I started it from seed back in 2005. Initially, I let it grow until it was several feet tall. I did some cautious pruning in the second year.
July 2007: 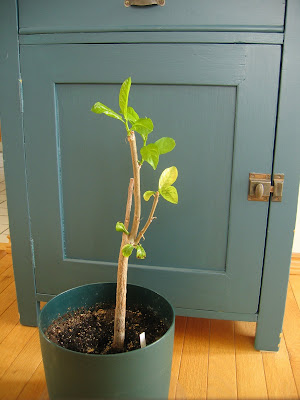 In late 2007, I cut the main trunk to about 6 inches tall. I applied Japanese cut paste at the wound (not totally necessary) and new growth appeared at the cut and below it. In retrospect, I probably should not have pruned this late in the season.
October 2007: 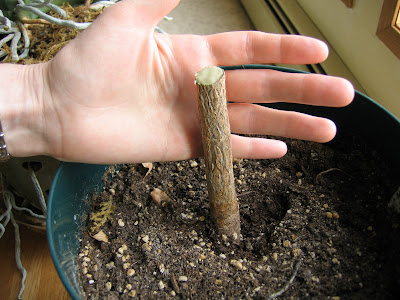 I let it grow and thicken its branches for a while.
July 2008: 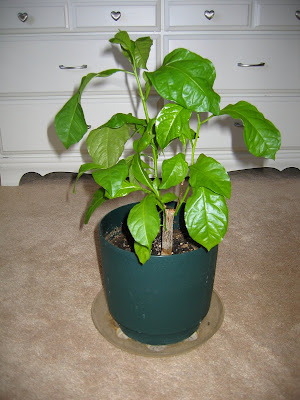 I am starting the bend the branches more horizontally this year. I hope to make the tree look more mature this way, creating the appearance that the large branches are bowing under their own weight. The baobab branches are quite brittle, and thus are not easy to wire, like the flexible fig tree. I chose to tie them down with string attached to elastic bands, which are stretched around the top of the pot.
May, 2009, a few weeks after the first pruning of the season: 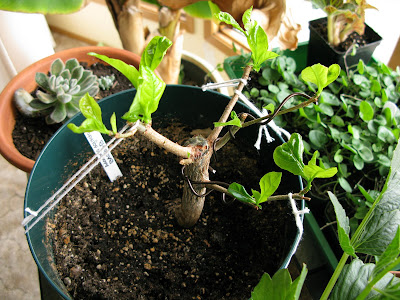 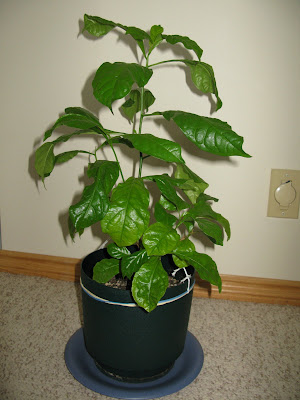 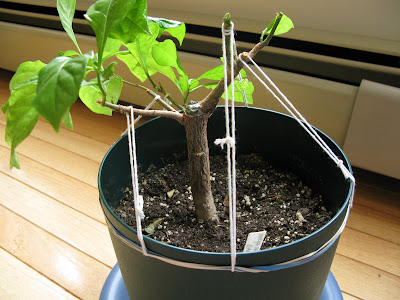 I am trying to make sure there are branches pointing outwards in all directions, to get a balanced tree: The baobab grows in a sunny indoor place all summer and in the fall it gets yellow leaves, which is the sign to stop watering it. When it starts to go dormant like this, I take it down to the basement and put it up on a shelf. It needs no light during this time, which lasts about 6 months. At some time in the spring, I see new green growth and bring the tree back up into the light. I won't bother putting it into a real bonsai pot until I get it a bit more developed.
Posted by Gardenista at 10:02 AM

I admire you determination. I always wondered how bonsai works.

You have a wonderfull tree there. I am trying to make a baobab bonsai to. But i still have a few questions. How warm you keep it in winter? And dit you prune the roots to get in a bonsai pot in the future and how dit you do it. My tree is about 20 inch so i have to prune it shortly.

My three is like i told about 20 inch tall and 0.5 inch thick. So i think i am going to prune it at 18 inch and the main root at 2inch. When would you prune it? In January ?

Just woak your seeds in water for about 48h. Then you can seed them. YOu have to wait for 1 up to 4 weeks befor they sprout. You always can scarf the seeds with a knife and then they will sprout faster and you will have more chances to succeed.