Signs of Green Life in the North

It's time to clear away the dead growth and dry leaves! While I have no obsessive cleaning genes in my body, this type of tidying is exciting because it reveals the new green growth of spring bulbs. Incidentally, those bulbs are now over two weeks late. I won't complain as long as they produce flowers soon. At this rate, we could have a lot of tulips in July.
Here are my first Fosteriana tulips, a white and yellow flowered variety named "Sweetheart". 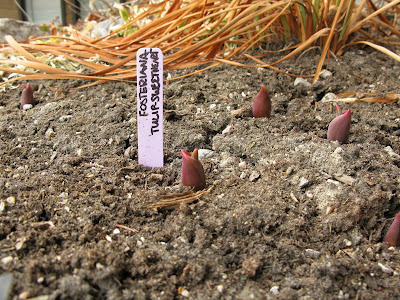 Fosteriana tulips (or Emperor tulips) are known for being the earliest blooming of the larger tulips, with the tiny botanical tulips blooming the very earliest. They should also return reliably year after year.
Here are the oh-so-tardy crocuses, just showing their greens at this point. 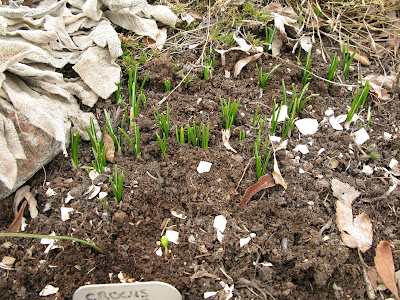 I sowed seeds for pumpkins, soy beans, parsley and cilantro under the lights two days ago. I'll be planting these outside in June. 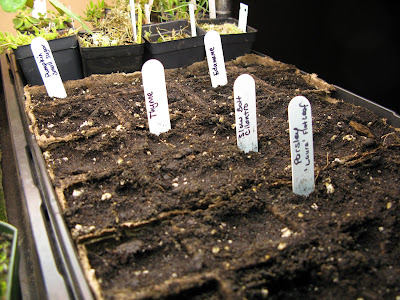 The cherry tomato plants are growing well, getting too tall for this seed-starting shelf. I keep the lights low to promote sturdy growth, but have to move the plants as they get taller. 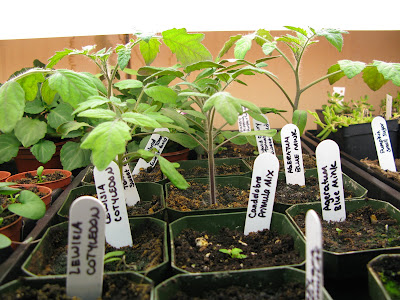 Thank you to the local community group who gave me this lovely potted mum after I gave a talk and slideshow on gardening last week. It was a lot of fun to share my gardening obsession with like-minded folk! 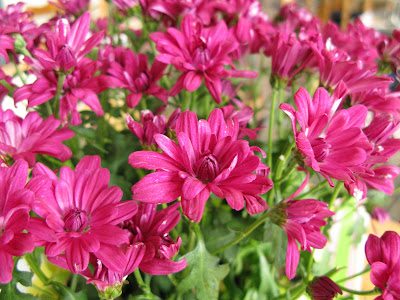 Halifax Flowers, La Ronge Not Yet

The trip to Halifax last week was lovely. I had the chance to explore the city center under sunny skies. The temperatures were no warmer than here in La Ronge, but at least they had blooming crocuses. 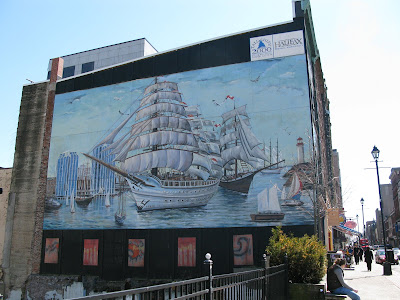 The Halifax Public Gardens do not officially open until May 7, and I wish I could see these gardens in about 4 to 6 weeks. I did see these cheery crocus blooms on the garden grounds though. 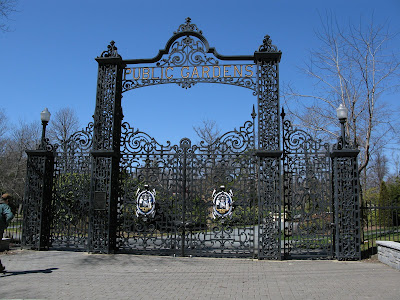 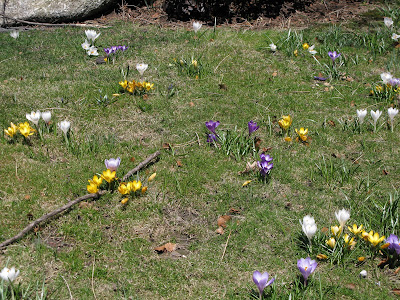 Here at home, my dahlia tubers have put forth some healthy green shoots. This is altogether a more cheery image than the skiff of snow that has accumulated outside this morning. 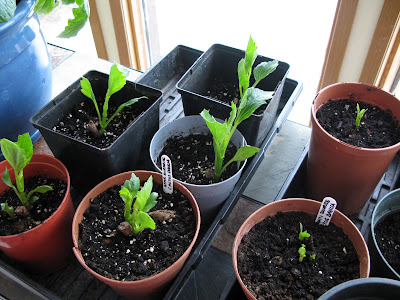 These are the days we have waited for all winter. Now comes the countdown until the first crocus or reticulated iris bloom. I have pictures of the these blooms on April 16 of 2008. I hope I don't miss the first blooms, as I will be checking out the bloom situation (okay, so actually attending a meeting) in Halifax, NS this week. Resident lawnmower man has been told of the duty to note any blooms in my absence, but I think he fails to grasp the importance of this task. I will have to call and remind him.
The alpine garden is now visible, having been completely covered in snow up to two days ago. 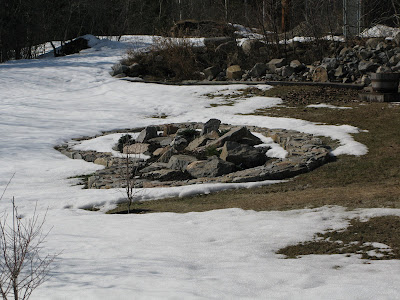 The sloped rock garden is first to produce blooms, though there are no crocus greens sprouting yet. I will be cutting the dead growth off in May, when there is little danger of damage to the new growth. 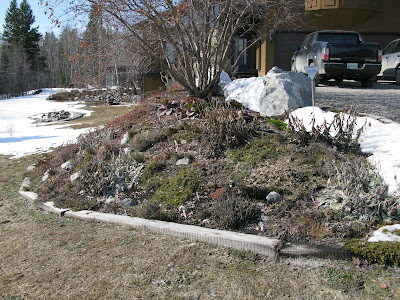 The vermi-composting bins are full and the worms are thriving. We'll be running out of composter space soon. Our garage is partially heated in winter, never dropping below -10 degrees Celsius. The worms survive well in these conditions but obviously, they would never survive outdoors. 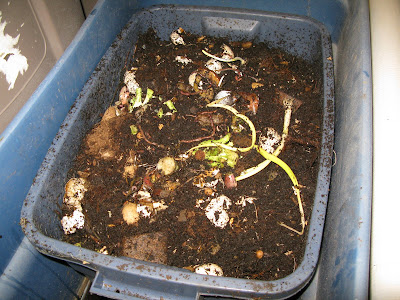 The worms do eat less at the cooler temperatures, and probably huddle towards the center of the bin to avoid the freezing temperatures at the periphery. As the temperatures rise, the food seems to be converted to worm castings alot quicker and we see a greater number of worms wriggling around.

This is the "scaled down" light garden for 2009. I mean that I fully intended to minimize the basement garden this year, however, that seems to not have happened. I did start a few things later than usual, trying to avoid having large flowering plants in April, with no place to go. I still need to start pumpkins and a few herbs in peat pots in a few weeks. My tomato seedlings sprouted this last week, so they should be a nice size when I put them outside in June. 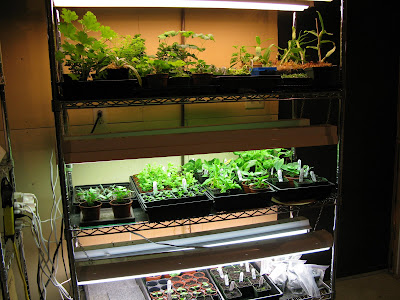 I am very excited to have germinated some Lewisia cotyledon, as this is one of my most favourite alpine perennials, and a true beauty. I could easily become obsessed with this plant. I have yet to buy a book solely on Lewisia, but I won't rule that out.
Posted by Gardenista at 9:29 PM 6 comments:

Mothers, don't let your daughters grow dahlias. Or at least, only let them see the flowers. I'm growing dahlias from tubers for the first time this year, having purchased 10 tubers in a bag from Costco. This particular tuber made me laugh: 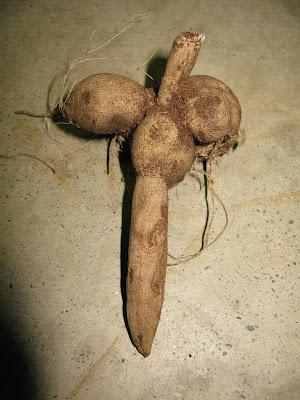 I never realized how large the tubers were. I'm going to need to take over another room to house the group of large pots. I've been told that I should start the tubers now so that they have a chance to bloom before our short season is over. These ones are "Star Surprise", a pink and yellow cactus-flowered dahlia. Since these grow into large plants, I'll probably share a few with friends as well.
This yellow Phalaenopsis (orchid) has been blooming since Christmas time: 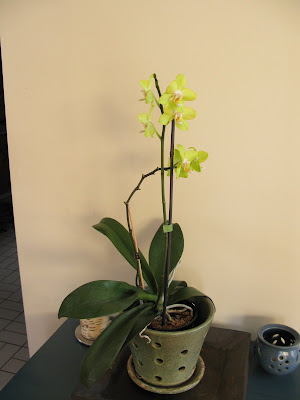 The ongoing succulent propagation experiment went well, in my first attempt at rooting cuttings of Echeveria. I just returned the re-potted succulents to my sister-in-law. Two months ago, I cut the tops off all her gangly Echeveria and rooted them as new plants. The aloe simply took a nice vacation under the grow lights in a separate pot. I ended up with another 30 plants left over, having rooted a bunch of individual echveria leaves as well. Unlike the original planting, I did not GLUE the rocks and plants back into the pot. I'm sure the plants appreciate their new freedom. 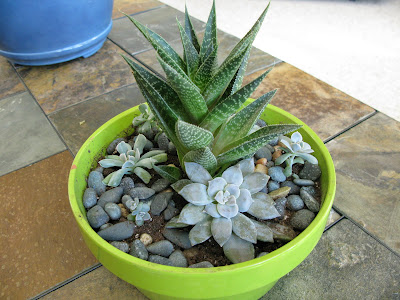 Meanwhile outdoors, the icy cold has been replaced by some good mud-making weather. I'm hoping to see green shoots of bulbs in a few weeks. The dog will be finding long-lost toys in the snow while icicles disappear as drips onto the snowbanks below. 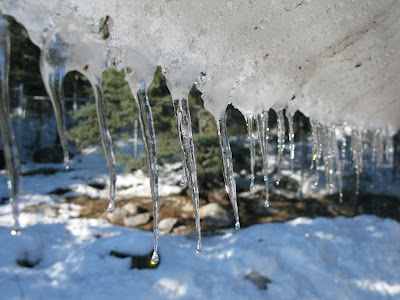