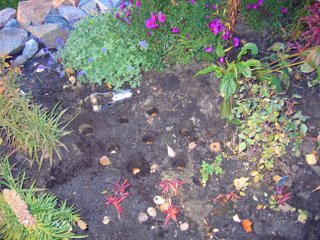 I planted bulb number 192 today and have 100 crocuses yet to go (but they're small and you can bury them in groups). Today's bulb plantings include Eranthis (Winter aconite), Tulips, and Scilla campanulata. This picture shows the planting of the Tulip "Skagit Valley", a frivolous botanical splurge for bicolored purple and white may-flowering tulips. I use the manual bulb-planter I bought in BC last year, a replacement for the cheap one that broke on last year's muddy soil. 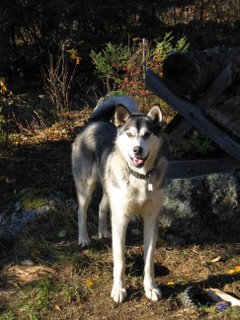 The fluffy backyard companion is happy to have company outside, but would rather go for a walk than supervise bulb-planting from behind the fence!

I dug up 3 of the cannas from the whiskey barrels today. I am not really intent on drying and saving the roots for next year (because it's more fun just to buy new ones every year!). However, I brought the 3 plants into the garage and potted them up. One has buds on it and I will feel cheated if I never get to see a bloom out of the poor tropicals that tried and ALMOST made it in this forelorn northern climate. 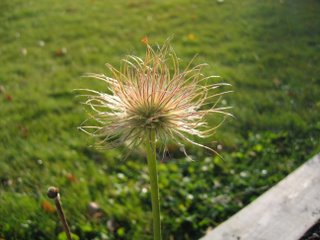 The fall colors are cheerful as some of the trees still cling to their leaves. The Siberian dogwoods have brilliant red leaves and the spirea shrubs are bright yellow. This pretty seed head belongs to Pulsatilla vulgaris (Prairie crocus) which rebloomed late in the season, after its big showing in Easter. 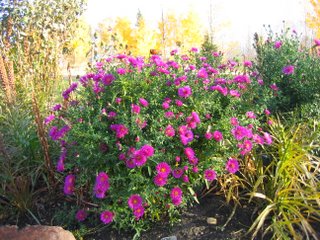 At left is the full bloom of Aster dumosus "Alert", a late-season bloomer. It is certainly the only plant with such a floral show in October! In another two weeks it will likely be covered in snow. It works much better here than the standard chrysanthemums, which never did bloom before snow and hard frosts.
Posted by Gardenista at 4:32 PM 1 comment: