I am hoping my newest little plant project goes well, seeing as I haven't had much experience with the world of warm-climate succulents. I am attempting to "renovate" my sister-in-law's succulent tray. She had a lovely tray of tropical succulents that I adored when she got it this past summer. Those fat, blue-green leaves and the spotted aloe did look so striking in the shallow painted terracotta pot. The plants unfortunately grew a little leggy and started to look sad, so I offered to try to fix it up.
Decapitated rosette from the top of an echeveria stem: 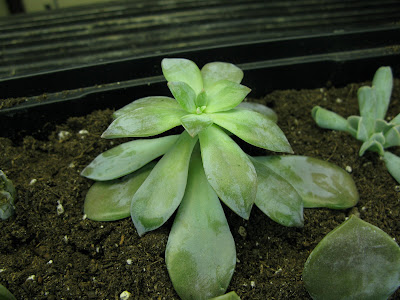 I have cut three echeveria to stumps and kept the root balls. The aloe looks fine and is in a separate pot. I am keeping the rosettes from the tops of the echeveria stems and many individual leaves, hoping that they will root and produce new plants. I made the cuttings yesterday, leaving the pieces open to the air on a shelf overnight (to "callus over", the websites say).
Tray of echeveria cuttings: 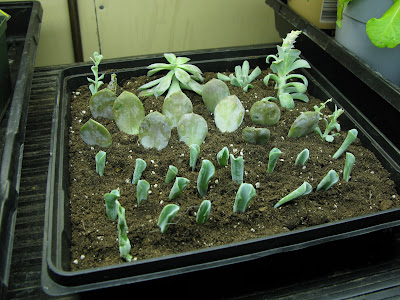 Today, I dipped the leaves, bare stem segments, and rosettes in rooting hormone and then stuck them in cactus soil. I will sparingly water these and wait for new growth. I hope this works! If it does, I may end up with a lot of little succulents. I just can't believe that I was lucky enough to find a few bags of cactus soil on clearance at the local hardware store in January! 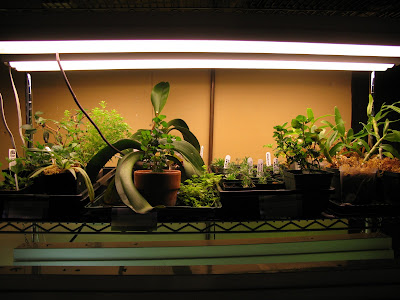 I have a few orchids, herbs, and little perennials for the alpine garden growing here right now. Nothing too exciting.
Posted by Gardenista at 6:40 PM 7 comments:

As I emptied the sack of dirty laundry from the trip to Arizona, I found this little lemon. No, I did not pack it there to freshen the scent of our unwashed things. I even thought I filled out the customs declaration truthfully when I ticked the box to say that I was not bringing any plant or animal product across the border. I suspect the devious work of the littlest gardener. 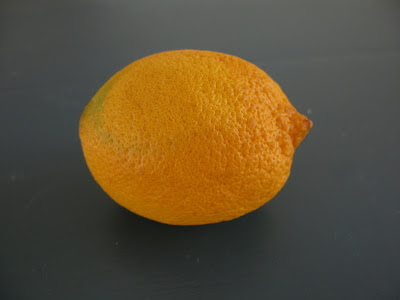 I can understand how those Arizona citrus fruits are so appealing, with their bright colors and fun shapes. However, there is a reason why one should not transport fruit across the borders. Pests and plant diseases can easily spread and ruin economically important agricultural industry. Yes, I am warning you all. The subarctic citrus fruit orchards of northern Canada are in great peril. Oh, the environmental disaster that awaits... 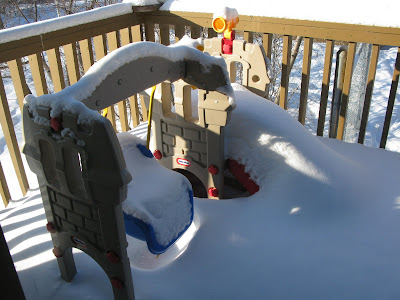 Arizona as seen by a Northern Gardener

Our family traveled to Arizona this past week to relax and in my case, check out the local plant life. My family members bought a little place down in Ajo and are in the contemplative stages of landscaping the lot, which had been abandoned for the past five years. I suppose anything that lives in a yard without additional water amid a desert is ridiculously drought-tolerant. The aloes looked great, and the few other things that looked dead were probably just dormant.

I figured that agaves must be pretty hardy too and swiped this plantlet from beneath a large plant growing in a yard down the street. If it doesn't live, it's no great loss anyways since it was free! My mother was going to claim she didn't know me if anyone saw swiping plants with a grocery bag and pair of scissors. 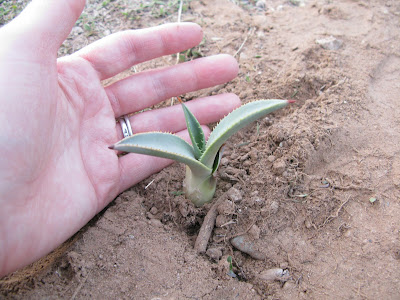 Landscape outside Ajo, Arizona. The weather was a humdrum string of cloudless sunny days with warm temperatures. I found the sun too intense in the mid-day, so I can't even imagine living here in summer. I think I'd lead a vampire-like existence, keeping my pale skin hidden in a dark hole somewhere. 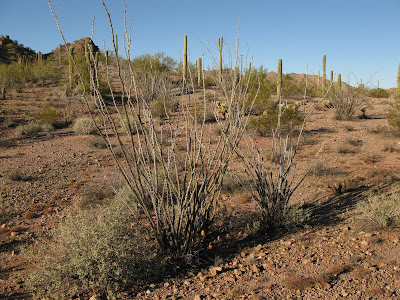 The cotton crop caught my eye, since I don't think we can grow this anywhere in Canada. I may be mistaken on that, but it certainly isn't growing up here in the subarctic. 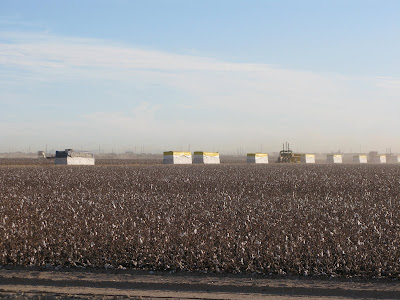 I couldn't help but get all excited while browsing the garden center at Lowe's in Buckeye, Arizona. Look at these beautiful bougainvillea! So cheap too. 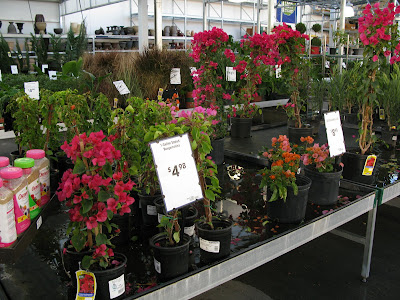 This table had drought-hardy plants that looked like a good choice for snowbirds who will leave the plants to their fate over the hot summer months. 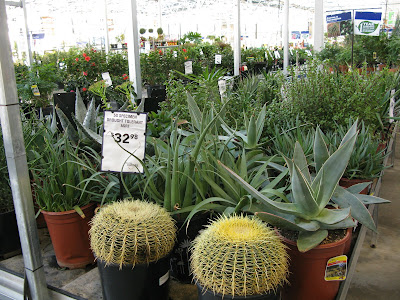 My plant-theft was not confined to the agave, however. I plucked bits of copper ice plant from a huge planting along a fence next to an empty house down the steet. These plants seem to root easily from their stems and some even produced some new flowers. I wish I had a close-up, because these hardy little succulents have beautiful flowers. I planted them in a row along the fence in the yard. 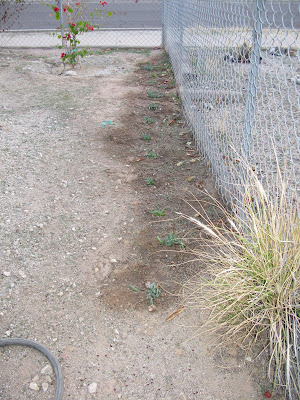 I love that some cities go to the bother of making utility towers less obtrusive by attempting to disguise them as palm trees! I spotted this one along the freeway in Phoenix. I can't say I've seen anything like this in Canada. Perhaps we could start disguising our radio towers as larch trees or something. 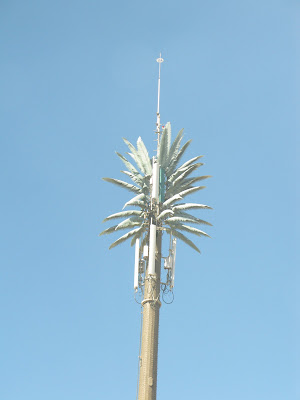 Very few desert plants were blooming when we were there, but this Ocotillo in Organ Pipe Cactus National Monument had some new buds on it. 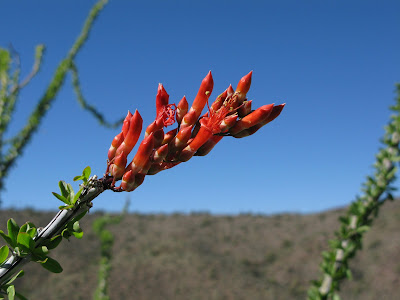 The palo verde is a very common tree in the desert and I was impressed with its adaptation to dry, harsh weather. It drops its leaves but can still benefit from photosynthesis occurring it its green trunk and stems. Brilliant! 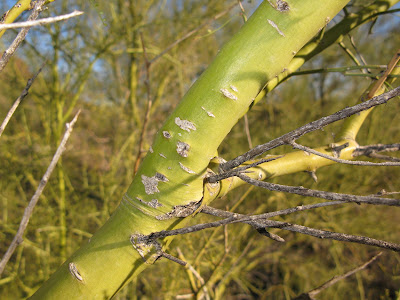 I don't know what "snow dog" has to do with this desert town, but this sign made me smile and imagine life at home. Our snow dog was very happy when we came back, making lots of excited noises and making us promise to never leave again. 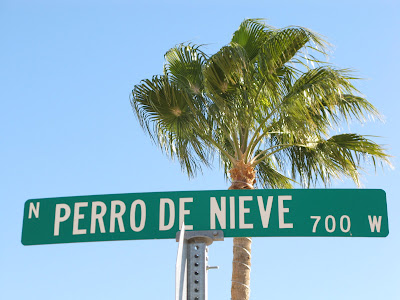 Branch of the large mesquite tree in the yard: 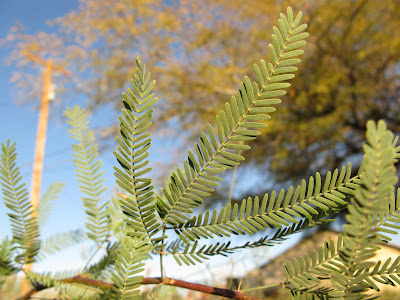 Desert mistletoe cut out of the mesquite tree: resident lawnmower man made himself useful and got up early one morning to cut loads of this parasite plant out of the large tree. I'd never heard of either the mistletoe or mesquite trees before, so this was all new to me. 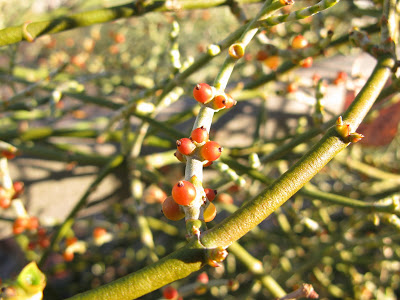 How can you tell I'm a Canadian tourists? I took pictures of a lemon tree. I'm sure the locals smile and laugh at us. But then, they'd probably stand outside and gasp at the northern lights dancing in our skies. 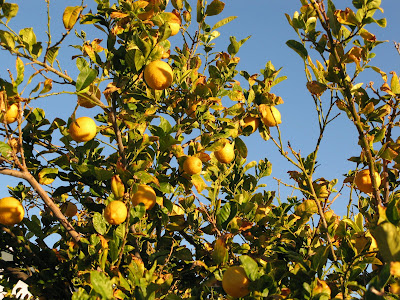 Altogether, I decided that Arizona is probably way too hot for me aside from a few weeks in December and January. Also, most cacti grow too slowly to be very gratifying. I think I'll stick to gardening in my part of the world. We may not be able to see our garden under all the snow for at least 5 months out of the year, but things grow furiously in our long summer days. I can live without my own fresh lemons too, I suppose.
Posted by Gardenista at 7:35 PM 6 comments: