Indoor Plants and their Pests

The indoor herbs under lights have had their highs and lows.  My inconsistent watering is a low, I'll admit.  However, the cilantro and basil have been destroyed by powdery mildew recently.  I've planted some new batches and have higher hopes for their success.  This is because I put the fan on them again, running intermittently on a timer for a few hours a day.  So far, the new basil looks much happier.
Some plants are prone to mildew in the best of circumstances, such as bergamot and phlox and several herbs.  There are mildew-resistant varieties of these plants, which I prefer if given the option.  Mildew-prone outdoor plants should not be watered in evening, so the they don't stay wet overnight.  Indoors, my mildew isn't likely due to overcrowding, since it is winter and I'm not growing much right now.  The lack of a natural breeze in the basement is a more likely culprit, and the fan is much easier than fungicide application, particularly because I want to eat these plants!
I started some lemongrass after the seed packet called out to me recently.  I grew this a few years ago and started on a Thai cooking theme for a while.  Eventually, I tossed the plant out, since it grows to look like a giant weed and makes an unattractive houseplant.  My large collection of dwarf bananas is doing well, though two of them have some little insects that make fine webs (spider mites?).  I removed some of the more infested leaves and sprayed the rest with insecticidal soap.  This kind of control seems to work, as the plant continues to do well.
The pepper plant isn't exactly thriving, since I really need to repot it to a bigger pot, but it is flowering.  I attempted to be its pollinator with a kids' paintbrush today.  I also have a multi-colored and -textured collection of Echeveria which I keep in continous propagation.  In summer, they go outdoors in pots.  In winter, they do well under the fluorescent lights and can be increased by potting individual leaves.  Their fleshy leaves have pretty geometric patterns and come in a striking variety of colors.  I try to convince the other holder of our credit card that these plants require handmade ceramic/pottery/stoneware pots and saucers to really complement their appearance.  He somehow can't understand my perspective on this and tells me to get off Etsy already.
While resident-lawnmower-man spent ages picking out new efficient light bulbs at the Home Depot, I browsed the seed section.  My theme here is not my usual perennials, but some things I can grow in one season in the empty spots.  Annual flowers and the yellow zucchini seem pretty simple.  I like cornflowers and Nemophila, as you can literally throw the seeds at the dirt and successfully produce flowers for the summer.  I want more sunflowers this year, after enjoying last years ones so much.  More specifically, I want to get the perfect photograph of a sunflower to blow up and put on my wall.  I have not yet achieved a satisfactory photo -- thus more sunflowers for 2013!  Last year's sunflowers were a sterile variety I bought by mail order (from somewhere, I don't recall where).  They made for decent photos as they were mostly unmolested by the squirrels.  The squirrels did climb them to investigate, but I interpreted their response to the sunflowers as one of bewilderment.  Our previous sunflowers had their heads ripped to shreds by the rodents.  I won't describe it, but the sunflowers looked similar to what our dog did to the other squirrels...oh the circle of life... 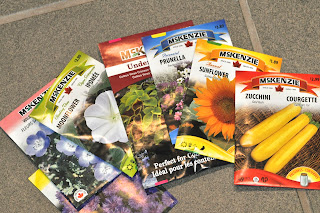 I haven't done any serious spring seed shopping yet.  The email offers from the seed companies have not captured my attention yet.  Perhaps the 3 feet of snow is dampening the mood.  I can't even walk to the compost heap if I tried -- and I did, but gave up after worrying I might get lost in the snowdrifts.