Flowers and Last of the Squash

My green bell peppers ripened to their intended deep chocolate color indoors after they were picked last week.  I hope my freshly picked butternut squash get a bit more "buttery" colored indoors too.  The vines look mostly dead, so I thought it would be a good time to bring them in.  I started the vines 6 weeks before putting them outdoors in spring. Squash-type vegetables would never ripen in time to sprout from the ground and ripen in our short season.  I've already stored away the pumpkins as purees in the freezer.  Mmmm. 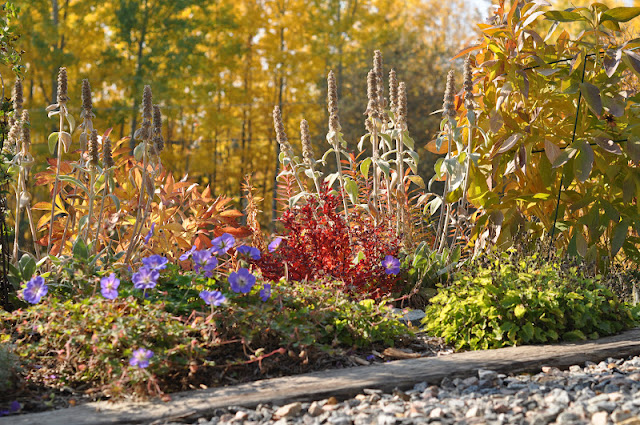 The colors are great this year and I love the late-flowering perennials, like this geranium "Rozanne".  What a beautiful contrast!  I've yet to plant the tulips, which arrived in the mail two days ago.
Posted by Gardenista at 1:08 PM 3 comments:

The pumpkins are picked, the butternut squash is lingering a few days longer, and the leaves are brilliant.  While we have a lot of evergreens in the forest, there are many deciduous trees with brilliant fall color here.  The viburnums and dogwoods have deep red leaves while the poplars and birch show bright yellows. 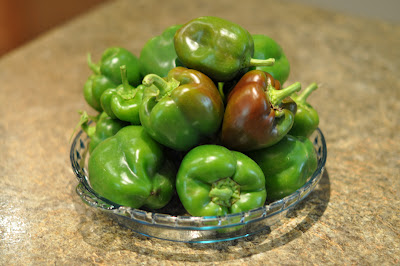 We picked a respectable amount of bell peppers from our two potted plants on the deck this last week.  I didn't want to see them get caught in frost and they weren't changing color in the cool weather, so they all were harvested.


There should still be some bulbs in the mail on their way to my yard.  I'm not doing much out in the yard these days, however.  I should be out photographing the great colors though.  I keep checking the aurora forecast, as we had some great auroras around this time last year, but the night sky has remained fairly quiet recently. 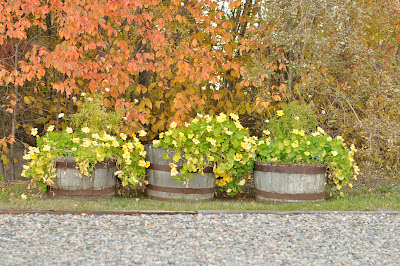 My yellow nasturtiums are one of the few potted plants that stay looking great until fall.  That's why I planted them.  These ones sit out at the end of the driveway.  That fact the flowers are edible is a bonus!
Posted by Gardenista at 6:17 AM 5 comments:

My first Botanus mail order arrived and was planted this week.  I ordered two novelty bearded iris "Final Episode" (yellow and purple flowers) rhizomes and they were promptly planted in the center raised bed. I hope they do well there.  They prefer to have some sandy soil and stay on the dry side in the summer.  I have only one other variety of bearded iris, and it has multiplied handily.  It is a plain but sturdy blue flower of unknown name.
I decided to let the alpine currant grow freely this year, choosing not to prune it in the spring.  I decided that it may take up more space in the raised bed, covering ground I otherwise would have to weed and cultivate.  However, there were several lily plants growing under the currant this summer, and those were moved to better locations.
My project in the center raised bed with a succession of annuals has worked well.  July saw a lovely mass of Papaver rhoeas, an annual poppy.  These faded in August and I pulled them in September.  Now, the cosmos are blooming their bright mix of colors.  These are tall cosmos, so they started pushing above the poppies in late August.  However, they are easy victims to wind storms, as the shorter supportive poppies are now gone.  I've pushed a bunch of bamboo stakes into the ground and tied them up.  It's worth the two months of lovely color!  The poppy seeds were volunteers from the flowers of last year (you could directly sow these in April) and the cosmos were directly sown in early May.  Cosmos are one of the few annuals that looks great right up until frost.  I think I may try some shorter ones next year, and focus on planting them around the edges of the raised bed.  For the center, I might try growing some of the late flowering Phlox paniculata.  It grows reasonably tall and flowers in September.


I hope my ornamental kale grows its showy pink centers before the grasshoppers eat it all!

Getting that Autumn Feeling

It has been a rainy weekend, but that's okay, since we had some nice weather in the last half of August.  I've put in a couple of bulb orders, though there won't be a huge bulb-planting extravaganza as in previous years.  I've decided to try a few more Oriental lilies, as they bloom later and will thus extend the lily season into August.  Looking at the garden now, I wish I had more Echinacea for their late season color.  I prefer Ruby Star and Magnus for their size and bloom shape (I hate the droopy-petal flowers on some of the other pink varieties).

Presently, I have only a few perennials blooming, including the Morden Chrysanthemum, Echinacea, Potentilla, Scabiosa, Gentiana septemfida, Geranium Rozanne, Monarda and the roses.
Our fruits/vegetables have had a challenging time this year, being victim to the raids of the squirrels.  Our dog keeps the ones in the back yard under control (she has eaten a few), but there are two squirrels in the front yard that have stolen all our tomatoes from the potted plants on the front deck, leaving the green tomatoes half-eaten and sitting like trophies on top our chain link fence in the back yard.  They even crawled under the carefully-placed netting to steal the strawberries!  I have lost patience and RLM has been out with his pellet gun, though I think it is getting rather late in the season to save many of the tomatoes.

Among the indoor plants, one of my Phalaenopsis orchids has rebloomed.  It did have three spikes, but I accidentally broke one off, leaving only these two stems full of flowers.  I had been keeping this plant under fluorescent lights in the basement for the past year, where it grew abundant leaves and looked far too happy and coddled, so I brought it upstairs and put it by the window.  It responded by blooming.  Orchid blooms last for months too, so keeping a Phalaenopsis after blooming is definitely worthwhile. 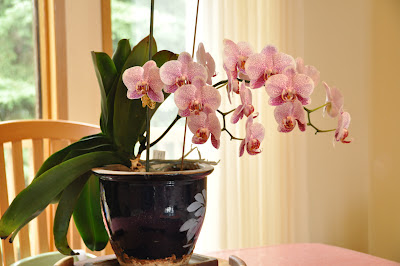