A Dry and Crusty Fall

Firstly, I would have posted last week had my computer not died and gone off to the computer repair shop. I'm borrowing RLM's laptop to do this post, but hope to have the old Apple back soon.

The snow from last weekend has melted and evaporated away, leaving all the perennials dead and crusty with a few hardy exceptions. The fall aster (Aster dumosus) and stonecrop look good yet. Also, the Gentiana septemfida is attempting a bloom, though nothing like its fabulous multi-bloom shows of previous years. Of course, I did divide it last fall, so I didn't expect much.
Gentiana septemfida: 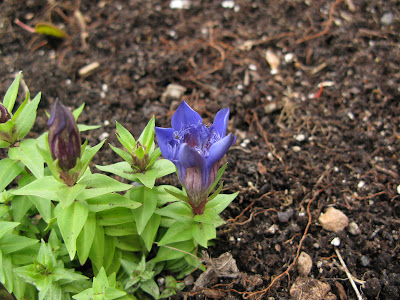 With the early snowfall, I think the colors on the trees didn't develop as well as usual, and now the leaves are all dry and drab. Oh well. I'm dedicating my time now to the indoor plants, reviving my interest in the aquarium (mostly involves spending money on it), and spending quality time with the composting worms.
With inspiration from my aquarium-crazy brother, I've decided to upgrade the fluorescent lights on the aquarium. This got me to thinking about the lights on my plants. Why do the plants deserve any less than the pea-brained fish? Then again, I'm thinking of upgrading the aquarium lights to allow plants to grow in there, so really, it's all about the plants anyways. I'm looking at the power compact fluorescents, specifically the Coralife high output T5 65W 6700K bulbs and a fixture to hold them. Is there anyone out there using these for their plant setup? Let me know if you've heard of such a thing.
Posted by Gardenista at 3:06 PM 3 comments:

Snowman! Well, not quite yet.

The two year old assistant gardener first noted the new white carpet outside this morning. Her perspective was definitely more positive than the comments from most of the adult prairie folk who are watching snow fall today. I was reminded by the assistant gardener that we must keep a carrot and hat on hand at all times for the accessorizing of snowmen. Noted. 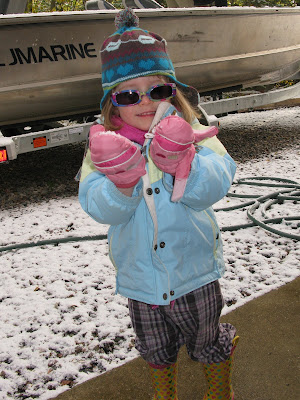 This snowfall finally took the petals off my corn poppies (Papaver rhoeas), which had actually still been looking rather colorful and showy. Oh well. It is October and we're in northern Saskatchewan.

At least the onset of winter makes gardening a non-option for the upcoming months. No need to feel guilty for not accomplishing anything out there now! I was thinking of it like losing your job and hearing this message: "We're sorry, you did a good job this past summer and all, but...we have to let you go. We've moved production to Mexico. We couldn't keep going in the current local conditions. You can clear out your pots and say goodbye." Here's to the excitement of houseplants for the next seven months. Gosh, don't you love Canada?
Posted by Gardenista at 7:14 PM 5 comments:

I first noticed the snow today on Facebook. It was only when a friend's status update mentioned the snow that I got up from the computer and looked out the window. My goodness, there were tiny white floating flakes falling from the sky! I think many areas of the prairies saw a little bit of the white stuff today. Besides snow in the sky, two fighter jets roared over our house today. They were flying north, though I can't imagine what exciting destination they were speeding off to.
Alpine garden, which looks remarkably attractive at this time of year: 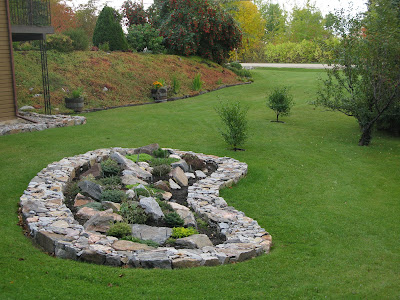 I have noticed that few of the alpines go brown and ugly in fall, leaving this bed more attractive than the big perennial beds right now. The little succulents simply change to reddish shades as the weather cools.

The sloped bank of sedum turns red for fall and winter, coordinating well with the surrounding forest and its colorful deciduous trees. RLM cleaned up this bank by beheading the dead brown flowers with the weed whipper. 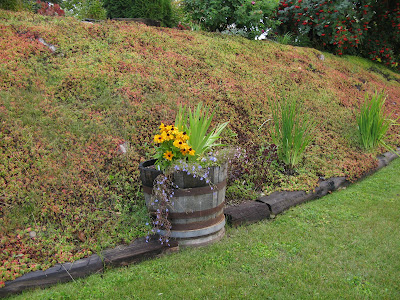 I did get some bark mulch from the local store before they cleared it out for the season. Unfortunately, I didn't benefit from any end-of-season sale prices, but at least I got some before we welcome the snow. I really appreciate how the mulch keeps the weeds down, as I hate crawling under the low branches of the mountain ash tree to pull weeds. I'd rather spread mulch once a year than get the tree droppings tangled in my hair on a regular basis. 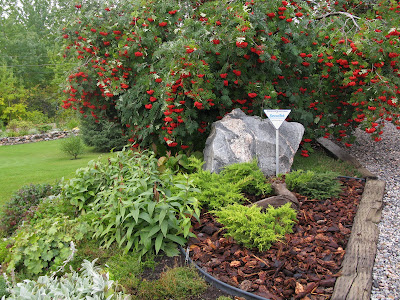 I blogged earlier this year about this patch of perennial border that I have never really liked. I replaced a messy mass of dianthus and moved a peony from a hidden spot in the yard to the center of this area. The hostas look decidedly nicer in the fall than those other perennials that lose their aesthetic appeal after flowering (like the dianthus). I dragged the hostas, Brunnera, and Alchemilla mollis from other areas of the yard and then underplanted the area closest to the front with about 20 Anemone blanda bulblets. 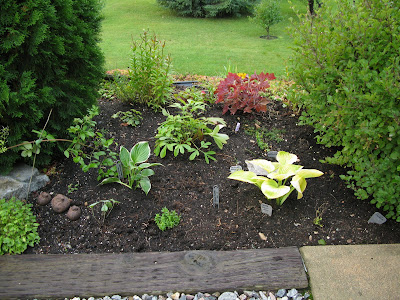