Alright, we finally have some spring flowers in the yard! 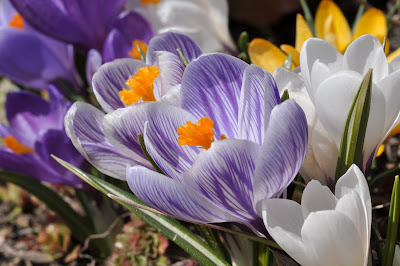 These large-flowered crocuses are bright, though they are small and you'd never see them unless you were looking hard.  Perhaps I need to plant several thousand to create a greater effect... 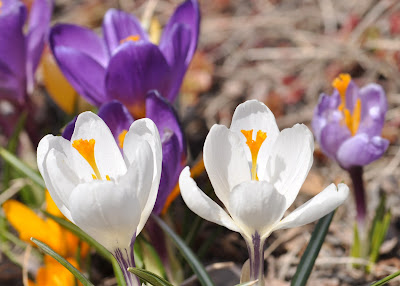 As an interesting aside from the plants, our subarctic location may have put us on a flight path for this research aircraft which was sitting on the tarmac at La Ronge's airport this evening. It is Polar 5, from the German Alfred Wegener Institute for Polar and Marine Research.

I used Google translate to read some of the rest of their webpages, which are in German. I like the Google translation of website's educational information on geology and the layers of the earth entitled "Earth's Crust and Bowels". Very Shakespearean. This aircraft is a Basler BT-67, built on the frame of a retrofitted Douglas CD-3 "Candy Bomber", which was flown by the Allies in 1944-1949. 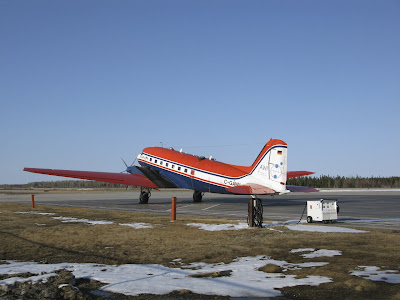 It got this name during the blockade of Berlin in 1949, when the Allied brought supplies to the western part of the city. The pilots apparently voluntarily tossed some candy attached to little parachutes from the planes to Berlin children watching the planes from the edges of the airstrip. The gesture was memorable, as evidenced by the lasting nickname. 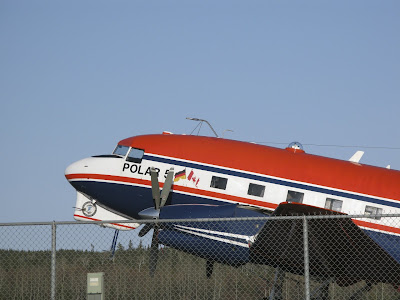 This aircraft is outfitted with many advanced measuring devices for polar research and can measure parameters such as sea ice thickness, the magnetic field of the Earth, surface temperature, and topography under the ice. Polar 5 has been operating since 2007. The Antarctic research season is November to March. It seems the plane has been in the Canadian north as a part of a project called Pan‐Arctic Measurements and Arctic Regional Climate Model Simulations (PAMARCMIP) 2012, in which it traveled to Station Nord, Resolute Bay, Eureka and Alert. Pictures from the flights are posted online. According to its schedule, it should be done this project now. The Polar 5 replaces the Polar 4, which was damaged beyond repair in a hard landing in Antarctica in 2005.
Posted by Gardenista at 6:44 PM 1 comment:

Despite this morning's fresh layer of snow, I was able to survey the progress of spring in the yard and garden. A few bulbs are coming up. The crocuses have started to bloom, though several flowers were obviously frozen and wilted from the -14 C temperatures and snow on the weekend. 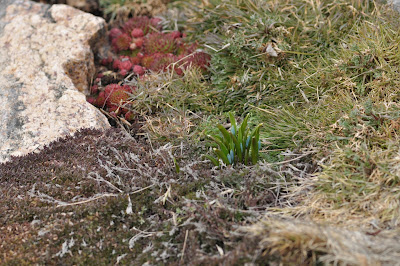 The species/botanical tulips are starting to poke up in their shady flower bed: 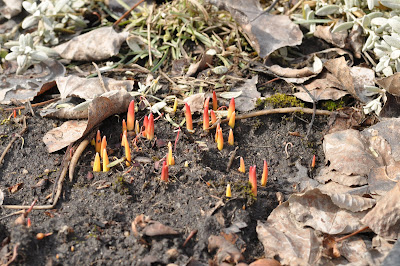 My hardy ice plant, Delsperma nubigenum, is looking great after a winter in the alpine garden: 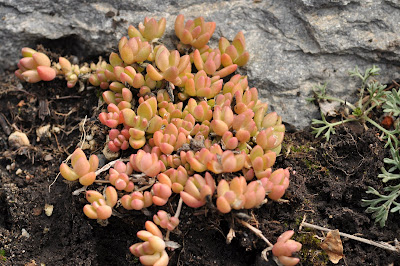 The alpine bed, a home for dwarf shrubs and low-growing alpine perennials: 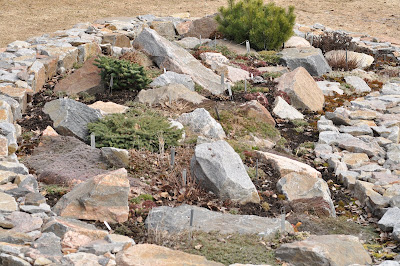 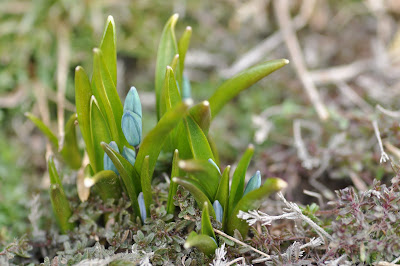 Sempervivum (hens and chicks) in the alpine bed: 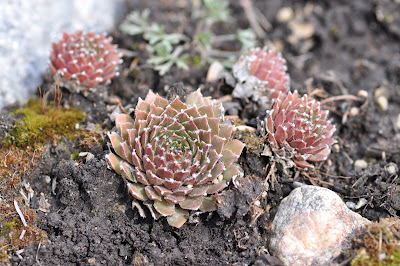 Sempervivum are very hardy plants and do well here. I've had one or two varieties die over previous winters, but most are fine.

The evergreen shrubs in the yard are all green and show no signs of winter damage this year. My successful hardy evergreen shrubs include mugo pine, dwarf balsam fir, and nest spruce. In the next few weeks, I'll be cleaning up the dead growth from the perennials, making room for the new growth. The indoor light garden is expanding to include dozens of pots of annuals and a few vegetables. It's feeling like spring, finally.
Posted by Gardenista at 1:47 PM 3 comments:

Not Much Happening Yet

After a weekend of snow, the sun has come out again. Nothing is showing any signs of growth yet. Only the evergreen plants and the pictures of plants on plastic labels are showing signs of green leaves (that hosta label had me excited for a moment).
Robin in the late afternoon today: 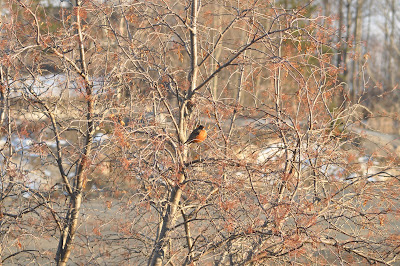 A few viola seeds are responding to the bottom heat and darkness and have germinated in the basement. A few more annuals were planted today and other plants had cuttings made. I repotted one orchid that was putting up with a pool of water in the bottom of its pot. Apparently, the drainage hole was purely ornamental. Who would make such a thing?
Flower beds still in hibernation: 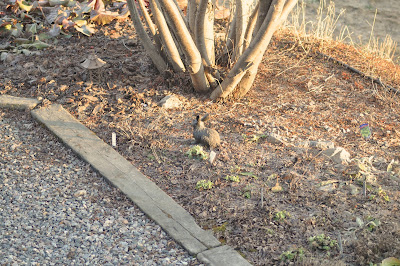 View of Lac La Ronge from the air last week: 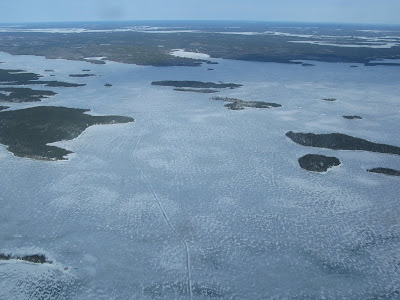 Intrepid explorers may still be making trips across the ice, but it is becoming increasingly risky and wet. I saw plenty of spider holes, the melting open spots with spidery arms radiating out from their centers.
Posted by Gardenista at 8:33 PM 1 comment: