I set up a tray of Echeveria cuttings a month ago, hoping to refresh my sister-in-law's succulent pot, which had become overgrown. I tried to root leafless stem pieces (some of those dried up and died), individual leaves, and the rosettes at the tops of stems. So far, the leaves and rosetttes look good, and the remaining stems look green, so I have hope for them. All of the pieces were dipped in rooting hormone gel before tucking them into a tray of cactus soil. The tray sits atop a plant heating mat, which probably helps the rooting process.

Here are are two different Echeveria leaves that have produced some roots: 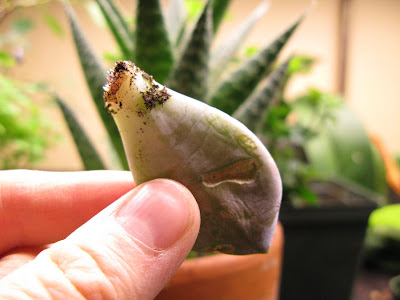 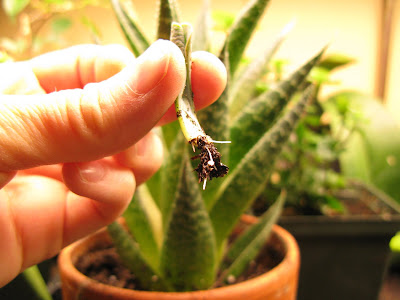 At first, I starved these cuttings of water, knowing that succulents like it dry. More recently, I saw them shriveling and watered them a bit more. They seem to have rewarded me by growing roots! I am very happy I didn't just kill my sister-in-law's plants by cutting them all to pieces. Phew!
Tray of Echevaria cuttings, under fluorescent lights: 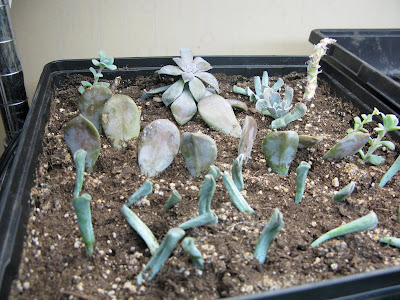 I fell in love with the ice plant (Livingstone Daisy, Dorotheanthus criniflorus, Mesembryanthemum criniflorum) while visiting Arizona last month. They are ridiculously easy to propagate and grow (thrive on neglect and little water) and have beautiful flowers. I got a packet of seed and planted a few, producing these seedlings after only three days! I think these little succulents would be perfect for a sun-baked flower bed or neglected sandy slope. 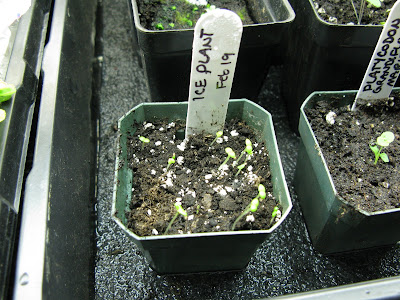 Now if only I could propagate my African violet. I have tried this before with no luck. Someday this will work for me. 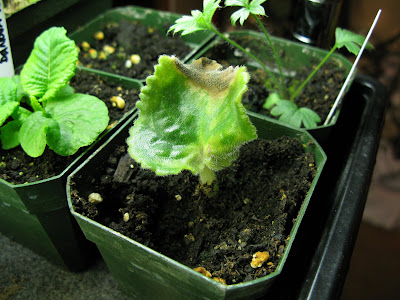 Watching things grow in the basement is a nice reprieve from braving the cold outside. It was -32C this morning, which is "mild" considering that north of us up in Stony Rapids, SK, it was -43 C (with no wind). I heeded the radio and put on a sweater!
Posted by Gardenista at 4:34 PM 8 comments:

In my first attempt to create a bonsai tree from a palm-sized boxed kit, I have so far been successful. I got the "Mini Bonsai Kit" from a coworker with whom I share my phone and whom is obviously aware of my gardening hobby/obsession. There are four Jack Pine seedlings poking their heads out of the dirt so far! I followed the instructions in the stamp-sized book: First, I soaked the seeds in water for about 24 hours, then placed them in the refrigerator in a damp paper towel, sealed inside a bag, for a week. 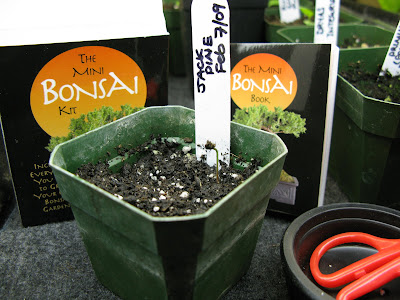 The kit also came with some tiny scissors, a very tiny pot, and a preformed peat pellet to be used as soil in the pot. I will be growing my seedlings in regular little 3" pots for now though. When they are a little bigger, I'll move them to some little ceramic bonsai pots I already own. After browsing through Google images, I see that I may have a fantastic bonsai specimen in about 100-300 years. I hope my future grandchildren appreciate bonsai.

Apparently you can buy this kit on Amazon.com. I was intrigued by this customer review:
"My son bought this from a Scool book club. It was perfectly sealed,but was missing the Peat Pellet needed for fermintation. A couple of kids in his class bought it. The 6.00 I paid for kit will now become 10.00 when I buy the missing part."
I hope this child is actually attending the "scool" book club, as I hear that reading is beneficial to spelling. Nitpicking aside, I've never heard of bonsai as the ancient art of fermentation. I can't imagine the fermented product of peat and jack pine seeds would even produce a decent beverage, because northern Canadians would have been aware of it by now. And $4.00 US for a tiny wad of peat? Wow. Surely you could collect some dryer lint and housedust, or just go OUTSIDE and find some soil!
Posted by Gardenista at 7:29 PM 10 comments:

Email ThisBlogThis!Share to TwitterShare to FacebookShare to Pinterest
Labels: bonsai

Snow and an Orchid for Valentines

I have recently noticed other garden blogs discussing things like "thaw" and "seeing the lawn again". Meanwhile, we sit under a fresh and generous blanket of snow. I don't anticipate seeing our lawn until April (I confirmed this sad fact by looking at past years' pictures). 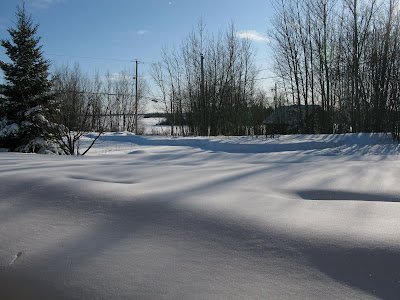 It was a lovely cold sunny day, so I tried to get pictures of Kona in her luxurious winter coat. I threw a few large marshmallows out into the snow, where she nosed around looking for them. As it turns out, sniffing for marshmallows in the snow is not a skill of the husky-malamute. 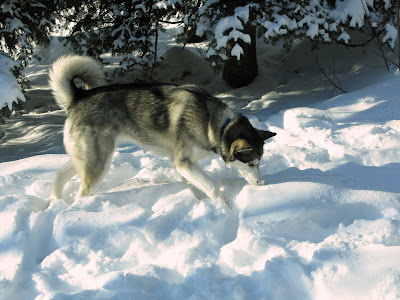 Here's Kona and her "snow nose". It was about -23 C here today, which is about perfect weather for a dog like this. I heard her bark this afternoon (fairly uncommon for her) and noticed some young men cutting through the back woods. They sounded somewhat intoxicated from their language, at one point trying to imitate Kona's bark. We don't worry too much about people getting into our yard though, since the dog is big and folks generally have a healthy fear of dogs around here. 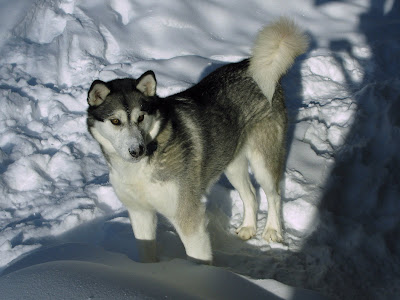 On reviewing my photos, I was surprised to see that this Paphiopedilum "Magic McNavy" also bloomed on Valentines Day of 2008. Prior to that, it bloomed March 2007 and November 2005. I think it has finally closed in on Valentines Day as its blooming season of choice. It is a unique flower in its own creepy bug-like sort of way. That's okay, since I don't see myself as the pink-roses-on-Valentines-kind-of-girl anyways. 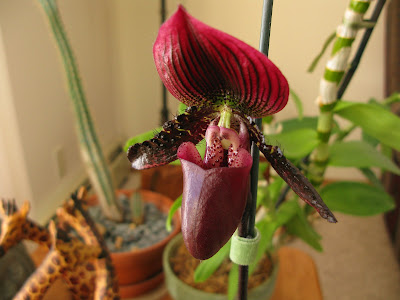 My basement seedlings include these Aquilegia vulgaris "Clementine Formula Mix" and Jovibarba mix (a succulent closely related to Sempervivum). Both plants are very easy to grow. 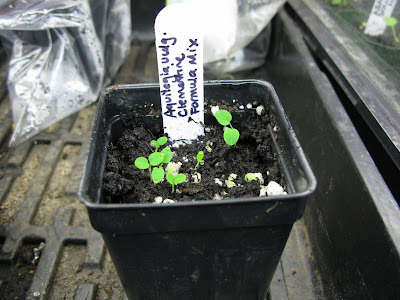 The Jovibarba are probably going into the alpine garden bed, as they are low-growing and form a nice mat. They are nearly indistinguishable from Sempervivum (Hens and Chicks), with only their flowers setting them apart. So say the books anyhow; I will be waiting until summer to see their flowers. 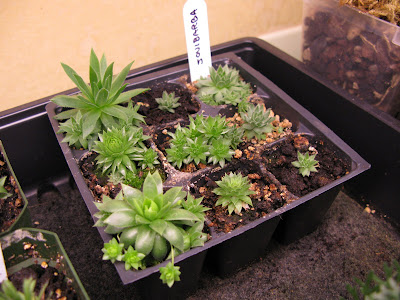 It is a beautiful, bright sunny day outside. The temperatures are even warming from the -30 C we have been enduring these last few days. I have been succumbing to the temptation to sow more seeds. It's nearly an illness. Just one more seed packet, I tell myself. Next thing you know, three little pots have been sown with more seeds from the stash. Most annuals and veggies will be sown later though, since it is too early for these. 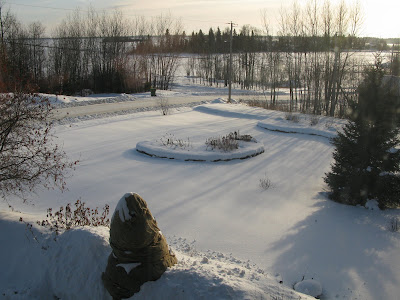 Meanwhile, it is therapeutic to see bright green growing things while the snowmobiles race by on the frozen lake. In a brazen act of violence towards plants, the littlest gardener pulled a few leaves from the lemongrass plant today. "Why waste the leaves?", I thought, so I made a smoothie using a bit of the lemongrass. I added a half can of frozen lemonade concentrate, a pear, a banana, vanilla yogurt, and a bit of milk to thin it out. The blender whipped it into this lovely smoothie that the littlest gardener also appreciated. 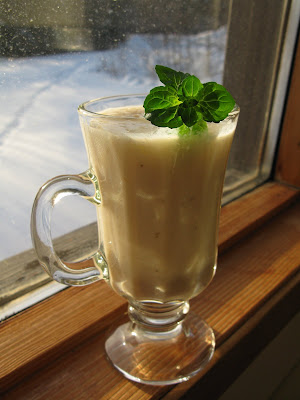 The lemongrass was nearly dead when I cut it down and repotted it recently. It now looks alive and well, though it's certainly not an attractive houseplant. 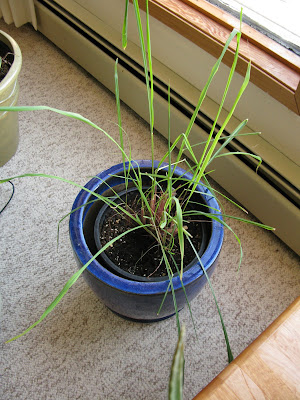 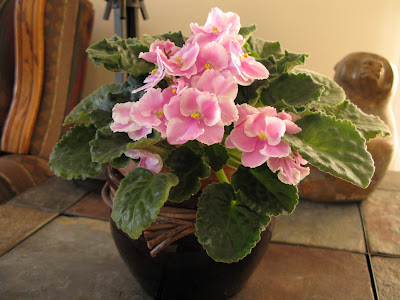