Succulents and Some Poppy Seeds

I put together a pot of succulents in shades of grey this year. The cuttings came from plants I had growing under fluorescent lights over the winter. I believe these are Escheveria, or some close relative. They are certainly not winter hardy, but you can grow as many plants as you want from tip cuttings or even from a single leaf stuck in some potting soil. Dear resident-lawnmower-man bought me this concrete pot this spring. 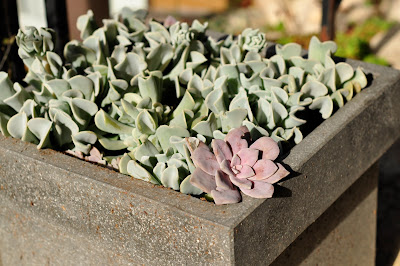 The gray plants and gray pot look rather modern and edgy, which is not really my usual garden theme, though it was unique. The only problem is that the pot has no hole in the bottom, so I have to tip it on its side every time it rains. I do keep it next to the house, where it gets little rain, but it still manages to collect some rainwater, which would otherwise drown the plants. Maybe it has a future life as an indoor pot or under the covered deck.

Thalictrum rochebrunianum 'Lavender Mist' (Meadow Rue) is finishing its blooming season. These tall hardy perennials do self-seed quite a bit, so this year I made a point of removing spent blooms. I let some seedlings grow at the back of the beds, but these narrow, 4 to 6-foot-tall plants just look silly at the front of the beds. 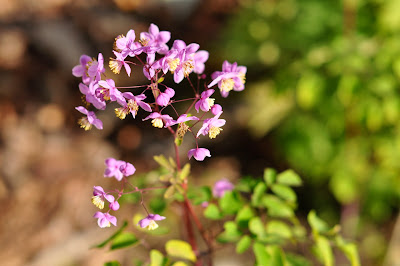 The annual poppies (Papaver rhoeas) are still flowering around the edges of the dense thicket of poppies that arose from the generous puddle of seeds left from last year's plants. RLM collected a jar of seeds from these, knowing all the requests we've had from friends and family who would also like to grow them! 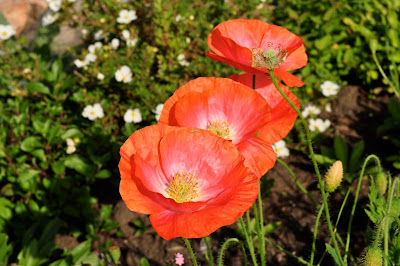 On the other hand, the annual breadseed poppies (P. somniferum) are long finished, with their seeds pods just drying up now. I ripped most of them out before this stage, as they turn brown after flowering and don't offer any attractive features in the foliage department. Besides, they do self-seed over-generously. I leave just enough to produce a few plants for next year, and hopefully still get a few lemon-poppy seed loaves. 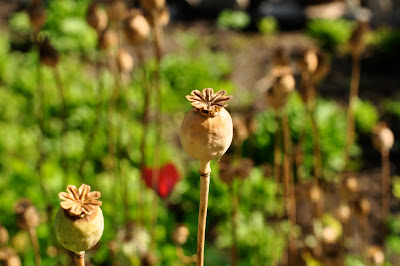 It seems that some folks in British Columbia like these flowers so much that they grew 3 acres of them in Chilliwack, BC and then got in some hot water with the law this past month. One gets the feeling that these aren't just overly-exuberant garden-bloggers hoping to create a beautiful sea of poppy flowers to admire and photograph. Or perhaps, they were planning on making LOTS of lemon poppy-seed loaves.

However, the part that really made me laugh was the television reporter's comment at the end of the piece, saying that "this operation demonstrates that it is actually possible to grow poppies in Canada", as if that was a feat never before known to any Canadian. It is an annual flower! You could probably even grow two crops a year in southwestern BC (which I suspect, as that crop wasn't even as mature as my own flowers up here in the north). Anyone who can grow a petunia or potted geranium could easily grow a poppy. I would guess this reporter probably hasn't ever owned a houseplant (you know THOSE kind of people...). Only time will tell if large-scale poppy-growing becomes a new craze among Canadians.
Posted by Gardenista at 9:10 AM 6 comments:

Just like the early back-to-school sales and early displays of winter coats, the late summer's offerings of flowers are here already. Although, I am sure that they are early this year.

Scabiosa caucasica (I have pale blue and these white ones) are in bloom this weekend: 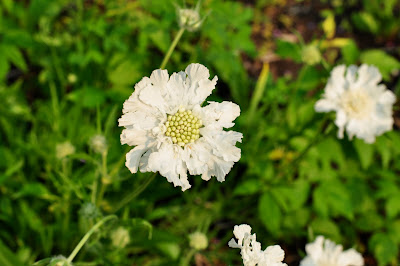 These scabiosa have sprawling plants that sometimes are hard to distinguish from grassy weeds. They also do self-seed a bit. I don't really mind though, as these are in the back of the raised bed, which is by no means a formal flower garden.

I lost my established lupine plants over the past winter, but there were a few seedlings, some of which are making some late-season blooms. I have preserved all of the yellow lupine (Lupinus polyphyllus "Gallery Yellow") seedlings, transplanting them all about, and so hope to have lots of these pretty yellow spires in the garden next year. 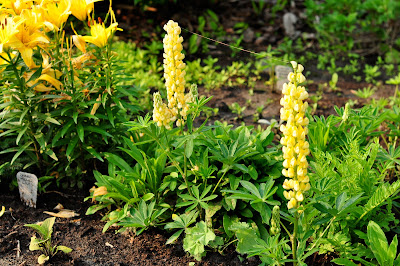 A very reliable perennial in this area is Aconitum napellus, or monkshood. It can produce flowers in various shades of purple/blue/white, and all parts of the plant are deadly poisonous. It's a great replacement for the tall blue delphiniums, now that those flowers have gone to seed or been blown to pieces by summer storms.
Aconitum napellus: 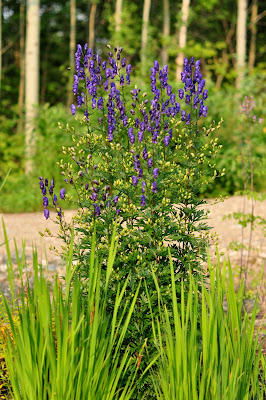 In the forest around town, the wild blueberries are in peak season right now. There is nothing better than a generous handful of those berries on your bowl of cereal in the morning!
Posted by Gardenista at 8:32 AM 5 comments: